Level 12 is a bit similar to level 8 where we learned about how state variables are stored on a contract (and also how we can read them, even when they are private).

In order to get a good understanding of how storage works in more detail, I decided to create a little drawing based on the documentation and the given contract code. To pass this level, we need to unlock the contract by sending the correct _key. We see that the key is checked like so:

The storage variables are kept pretty basic (no dynamic arrays and the likes) and are listed in the following way. Think about how we can read data[2] which includes the key to unlock the contract.

Now, I decided to read an re-read the documentation about storage slots and how data gets stored. You'll need to do so as well if you really want to understand where the data lives on the contract. Here are a few pointers from the docs but written in a way that we can use in this level:

Now, if we take our code and show that visually as data slots, we get something like this: 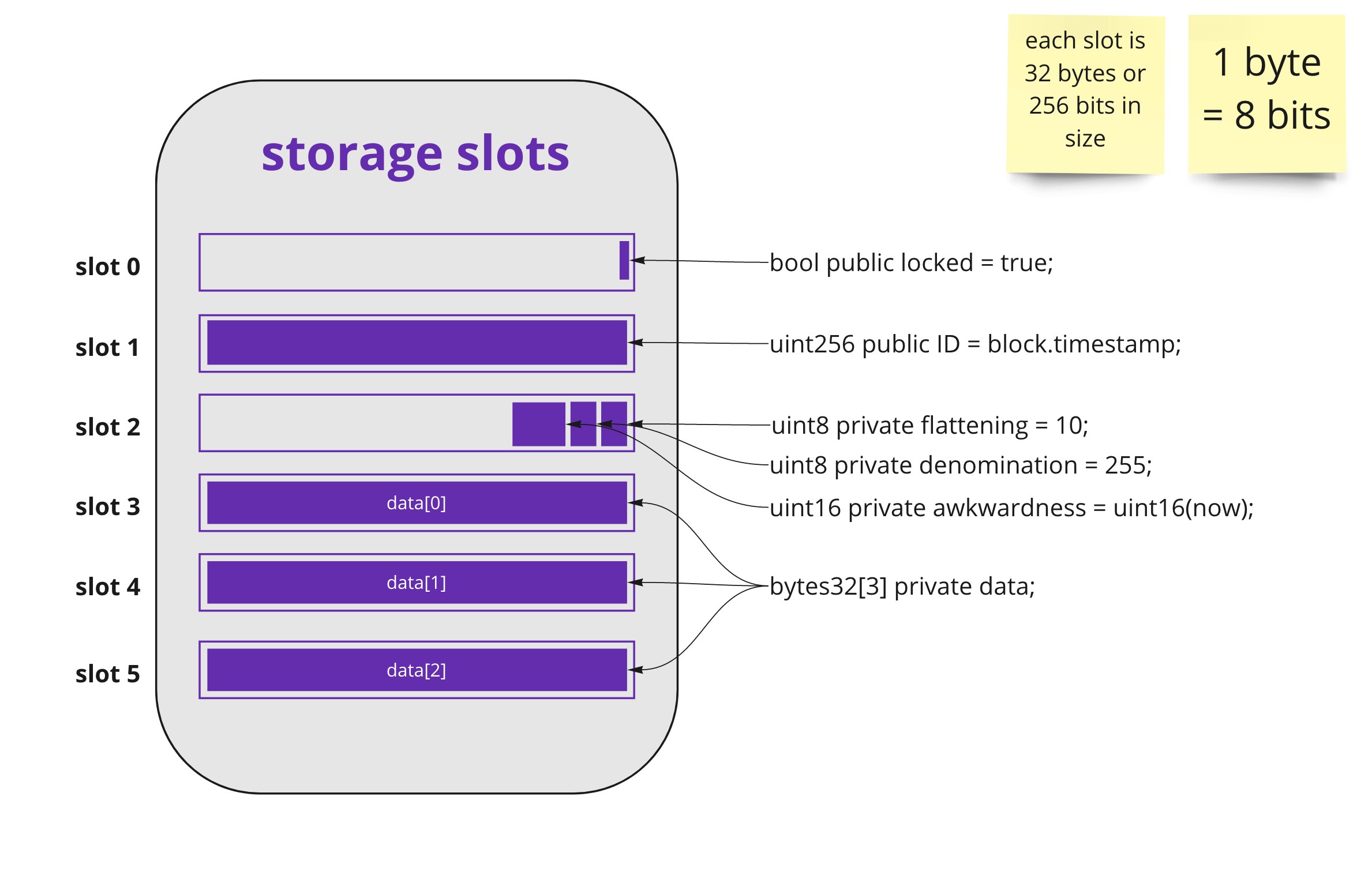 This gives us a visual way to see at what data slot the data[2] lives. We see that this is storage slot number 5. When we know that, we can grab that value by calling the following code from the Ethernaut console (as always, replace my instance address with that of your own):

You can probably just finish the level in the console, but I like to use Remix to just code up the hacks there.

When we look at the result we get back from storage, we see that we get 32 bytes of hexadecimal data back. In case you wonder why there's 64 characters:

A single byte is always represented by two hexadecimal digits from 0x00 to 0xFF, the latter being the largest per-byte value of 255.

The key should be bytes16, so we can cast the bytes32 result we have in our hands into bytes16 and then we'll be ready to pass it to the unlock() method of the Ethernaut contract. Again, you can do this all in the console, but I used remix.

I started by adding the original contract, in order to be able to call it easily from my own contract. This is how I started:

This is just a copy-paste from the original contract, with our Hack contract added below. We'll start by adding a reference to the Ethernaut instance as follows (make sure you replace the address with your own level's address)

Now, we can start creating our payload by casting the result we found in storage slot 5 into a bytes16 value. After that, we send it straight to the unlock() method of the Ethernaut level. Here's the code I used.

Just deploy to Rinkeby and call the attack() method to unlock the level. After doing that, you can go to the Ethernaut console and ask what the value of the lock boolean is.

And there you have it, an unlocked contract and another Ethernaut level passed.